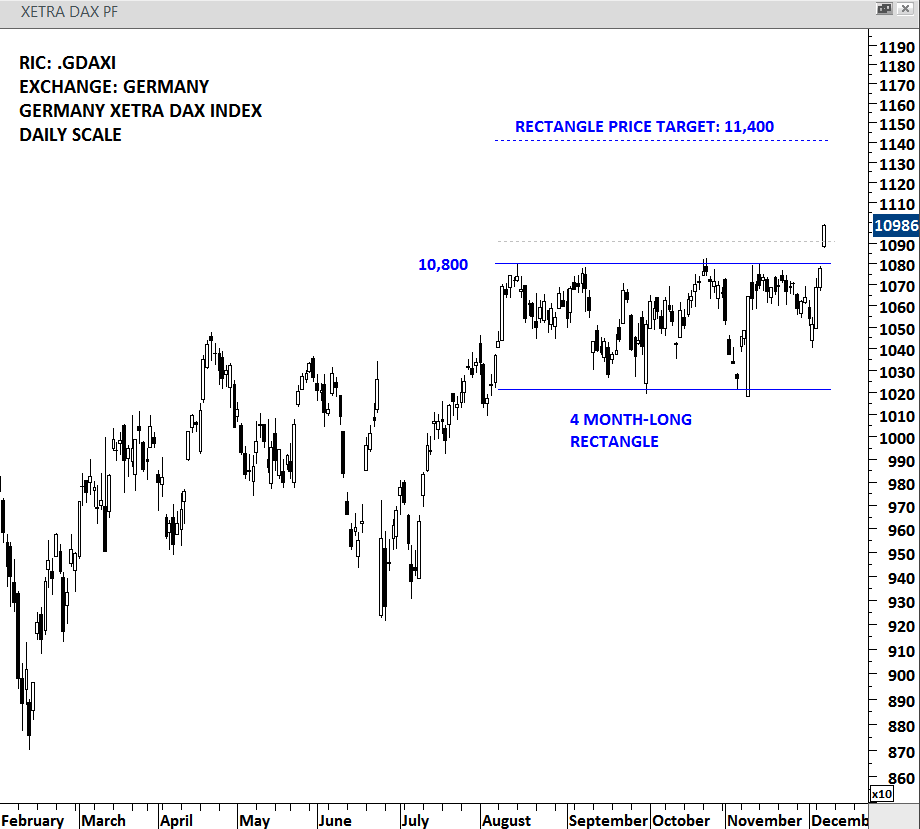 Germany’s DAX Index breaks out of a 4 month-long rectangle chart pattern with a possible break-away gap. Tech Charts blog drew attention to the developing chart pattern in the last week of November (Germany Dax Index – 20/11/2016). Today’s price action cleared the strong 4 month-long horizontal resistance at 94.60 levels. For common stocks, Edwards and Magee in their book Technical Analysis of Stock Trends suggest that for a breakout confirmation a daily close by a 2.5%-3% margin above resistance level is required. While, this margin can be perfectly fine for stocks, for indices, commodities and currencies it could result in a delayed entry. More appropriate threshold could be a daily close by a margin of 0.5%-1% above the resistance area for indexes, commodities and currencies.

Breakout on Germany’s DAX index cleared that threshold (grey dashed line at 10,910) with a strong daily close and confirmed the breakout from the 4 month-long rectangle chart pattern. Rectangle is a continuation chart pattern. Breakout not only took place with a strong daily close but also with a possible break-away gap. Richard Schabacker in his pioneering research (Technical Analysis and Stock Market Profits) on classical charting, explains break-away gaps as follows:

Break-away gap appears at the beginning of a movement and generally comes at the completion of some definite area formation. It is seldom covered for some time in the future and, when it proceeds from a strong major bottom formation, it may never be covered, or at least not until the return of prices in the next great cycle some years later. The Break-away gap is comparatively uncommon and indicates a definite change in the technical picture…The logical conclusion is, therefore, for a continuation of that strong movement in the direction toward which the gap was made.

As a matter of fact, it is always difficult and frequently impossible to be certain whether a gap is of the Common or Break-away variety at the instant that the gap appears. This is the principal reason why we cannot place too much credence in the various gap theories and why we must consider gaps as of only secondary importance in forecasting. The fact remains that most gaps which lead decisively out of an established pattern are not closed; they become and remain true Break-away gaps. And the wider the Break-away gap at the breakout, the less likely it is to be closed.

In brief, the Break-away gap emphasizes the breakout of prices and indicates a sudden change in the technical picture, but the mere fact that prices have broken decisively out of a technical formation is of greater importance than the gap. When the evidence of the gap is added to all the other evidences of a decisive breakout, we are encouraged to act promptly and decisively.

For stock traders, I attached below the ISHARES DAX UCITS ETF that is listed in Germany. Price chart of the ETF is very similar to the index as it tracks the performance of the XETRA DAX index. The upper boundary of the rectangle was standing at 94.60. With the decisive breakout I initiated a long position with a stop-loss slightly below the boundary at 93.30 levels. Rectangle chart pattern price target is at 100 levels for the ISHARES DAX ETF. Tech Charts twitter followers can find chart pattern breakout signals under #TECHCHARTSALERT 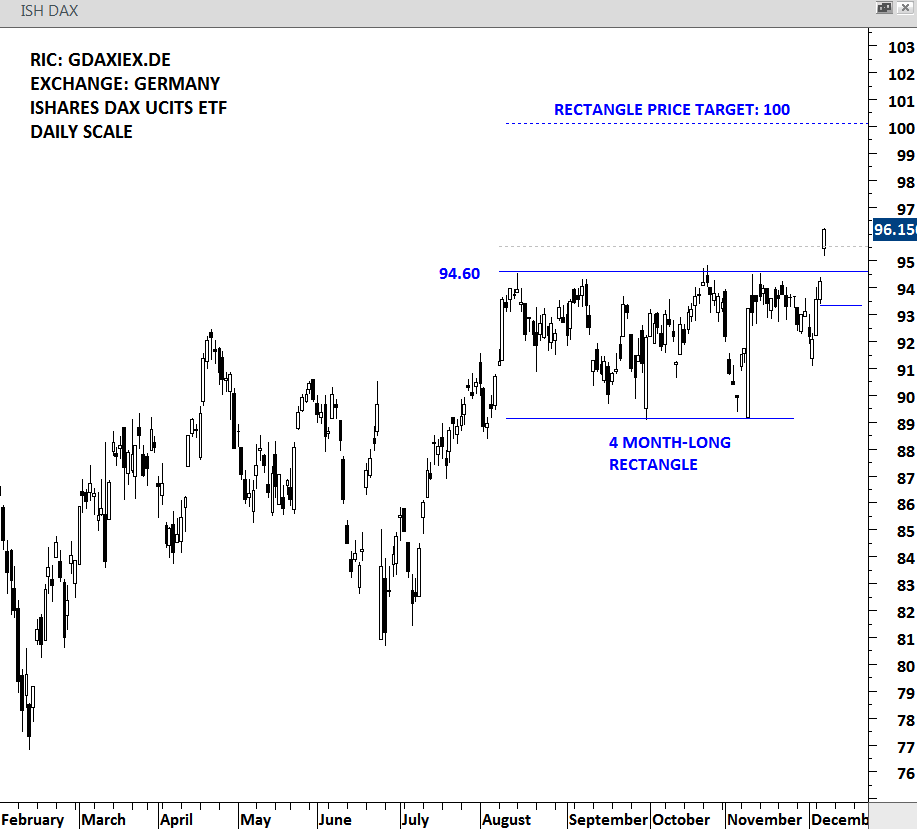 Strength in European equities can gain momentum. A chart that is currently on my watch list is PORSCHE AUTO HLDG  listed in Germany. Stock is possibly forming a year-long symmetrical triangle that could act as a bottom reversal if the price can clear strong resistance area between 49.65 and 50. A decisive close above 50.85 levels will confirm the breakout from the long-term sideways consolidation. Tech Charts twitter followers can find developing chart patterns under #TECHCHARTSWATCHLIST 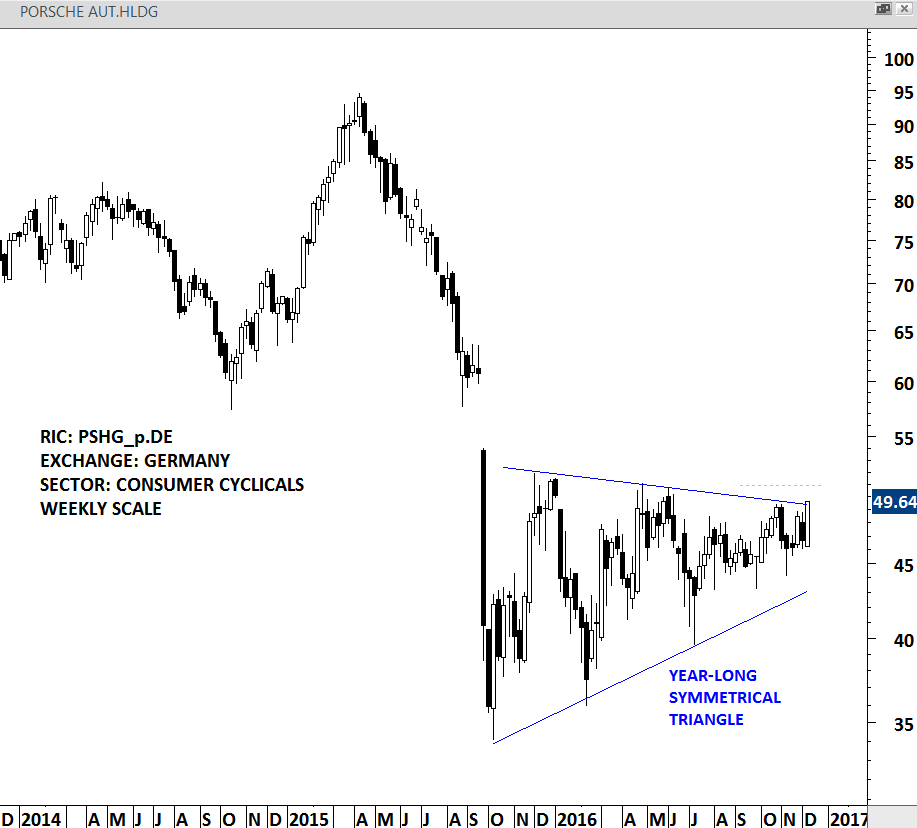 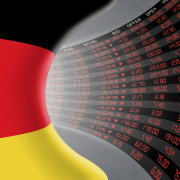 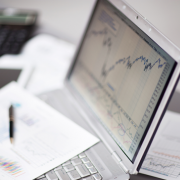 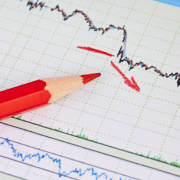 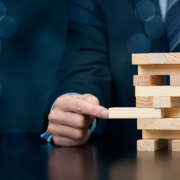 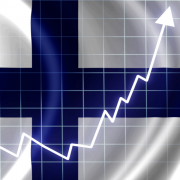